As is sometimes the case with me life got in the way of fitness this week. As I said on Monday I did a double class of RPM (ouch) and Pump. But it was all down hill after that. I was already battling the flu Monday then on Tuesday Mayhem came down with it so we basically dropped Mischief off at kindy on Wednesday and slept the day away with Daniel Tiger playing in the background (this is the one time that I will concede that having a TV in the bedroom sometimes comes in handy). Thursday was more of him being sick and Mischief being moody then last night BAM Mischief comes down like a ton of bricks. So now the only ones not sick are Moody and The Man.

Long story short the only fitness I have been doing is getting up and down what feels like a million times a night. It has gotten so bad that The Man is getting our groceries from the click and collect people at the store (I order online then go in to collect it to save on delivery fees – totally worth the slightly inflated prices to avoid an hour every week of whinging whining and nagging for every second thing that comes into their field of vision). I was supposed to go this morning but I haven’t left the house aside from to drop Moody at school and pick him up… fun times.

That said though The Man has promised me that I can double up at the gym this weekend so I should hopefully still get in my 3 day minimum.

So to add a bit more fuel to this fire, given how well the housework Wednesdays have gone: 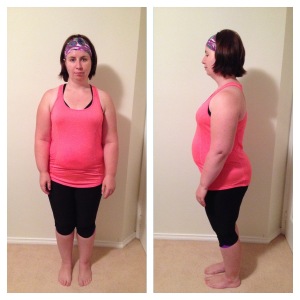 A starter pic, this is my before. It was in all honesty taken a few weeks ago but my measurements are exactly the same. This is my starting place. So not proud of this pic but it reminds me why I am going to the gym and WHY I need to avoid the dairy milk chocolate that is in my cupboard!