Let me preface this by saying firstly my family can tend towards the frank and a little towards the crass at times.

Mum hosted a lunch for the Great Aunts (My Nanna’s sisters) and I was invited along with the kids a little before Christmas. It is an annual tradition that I haven’t been a part of before because I have been away. I was having a discussion with one of my Aunts about the demise of my relationship and how I was still sad 7 months later and I didn’t understand why.

My Aunt said that I would be fine because there was nothing that I was getting within the relationship that I couldn’t get elsewhere. That I could get love from my kids and my family, conversation from my friends, my sister piped up that I just need a few good “toys” (which is where the crass comes in) which garnered quite a round of laughter. But I said I know all of that, what I really miss is the hugs. There is nothing quite like having a hug from your man, don’t get me wrong hugging my children is divine but it just isn’t the same thing. It was something that couldn’t be argued with. My Nanna has been single for a lot of years and she piped in with that she missed being able to put her cold feet on my Pop’s warm ones in the night, another Aunt said she missed random hugs during the day and the hardest part of losing her husband had been losing that contact. 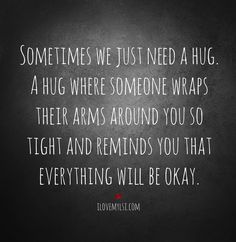 I couldn’t agree more. But I have come to see that it isn’t just about bodily contact with a male type person. Anyone who is in my inner circle knows that the breakup between The Tinman and I hasn’t been smooth. He has done his absolute best to kill any feelings that I had for him, and I would have to say he succeeded. I don’t miss him anymore, I know that, I miss the idea of him. Of having someone around to help (especially on the days the kids are on my very last nerve), of the kids having their father in the house with them. I really miss the idea of growing old together. But missing who he is as a person, not so much. I think it is safe to say most of my illusions have been shattered. Which was brought home to me the other day when he was dropping the babies off from a visit he had with them. I made very clear that I wasn’t impressed with him not calling them and not answering or even acknowledging their calls to him. In the end he turned on the “I’m almost going to cry” act and I fell for it and so I hugged him because I felt bad for upsetting him. Even those sort of hugs used to be comforting, warming. But it was… dead, awkward. I wouldn’t say it was horrible but it certainly didn’t produce that push of “feel good” that I have associated with contact with The Tinman. Even before we got together this time I had always gotten that little push from hugging him, even as a friend.

Thinking back on it I was afraid those feelings were gone forever, or at least until I found another boyfriend type person and to be honest that idea has fallen back off my radar. Right now the timing is so off it’s not funny, between the munchkins, TAFE, uni and half marathon training (starting next week eep!) I just have nothing that I can contribute towards a new relationship. So much for getting back on the horse right?

Then I remembered that I have felt that feel-good push recently. Not from a boyfriend type person, but from a friend. I actually cannot remember if I have written about The Russian here before… but I met him about a month after I got into town. He belongs to a social group that I wanted to join. We met for dinner and there was chemistry, boatloads of chemistry. He has gorgeous manners, is the type of man who guides a lady across the road, stands when you approach or leave the table, walks on the side of the path nearest to the traffic, opens doors and is generally just chivalrous. Plus the accent… kind of a turn on. BUT I was a month out of the car-wreck and still dealing with Tinman being mean when we met. So it never went anywhere, and now I help him to scope for new girlfriends (I swear if he tells me he wants to date another 23 year old I am going to scream) and we chat most days over an instant messaging service. We have definitely moved from the “hey I am scoping you out” phase and into the friend-zone, although he keeps telling me that if I’m not married by the time I’m his age we should marry each other. Anyway, we have started doing classes together, once a month we go to class and talk and laugh and generally goof around. But a few weeks ago I asked for a hug. I had had a particularly rough few days and was feeling atrocious. So we stood in the street and he just held me, I buried my head in his chest (because he is 6 foot tall to my 5’6 on a good day) and just let myself be held. Instant comfort, instant calm. Instant feeling of being soothed. He has promised hugs whenever I need them and I couldn’t be more grateful. Thankfully his current girlfriend gets that we have a bit of a weird relationship but that I pose absolutely no threat to her or them, and she and I get along so she doesn’t mind me borrowing him every now and again.

It’s funny how it’s the small things that make a big difference to how we see the world, how small gestures can make such a huge difference to how we feel. How a gesture of care from someone we are close to can feel so good. Even funnier how a mental shift can change the dynamic of something that we think will never change and make us think about how the same gesture can mean 100 different things depending on who gives it.