I belong to a forum, and a lady posted there today about feeling inadequate, about how her ex partner had told her that he loved her but that he needed her and 20 other women to be fulfilled. Which got me thinking about feeling inadequate. It’s a feeling I am very familiar with. I have felt inadequate in one way or another for most of my life. I can remember one of the girls I was friends with in primary school, she had long flowing hair that her mother had never cut (my hair was always short because my Mum hated dealing with long hair) and could play the piano beautifully (I wanted to play the piano but it wasn’t something that I had ever told my parents). I felt positively inadequate next to her. These days I feel inadequate next to one of my favourite girl-friends. She is a single Mum to 4 kids and makes it look easy (meanwhile I am over here tearing my hair out most days), decorates the most beautiful cakes, achieves spectacular marks at uni and is generally an all around badass. Next to her I feel small.

When I look at it in those terms I think that if I feel inadequate it’s because I’m not fulfilling myself. I have these expectations of myself that I don’t live up to, these gaps in my personality and in my life that make me feel deficient. Since The Tinman left I have been focussing on filling those gaps. Before he left I had been attempting to fill them with his presence. For a lot of years I staved off these feelings of inadequacy because if he loved me then surely I was OK right? When the inadequacy would pop up I would express it by saying I felt “stuck” or like I was stagnating. But the thing is he never really filled those gaps, I was always left feeling “less than”.

So now I am filling my own gaps. I am doing that by exploring all of the things that I was gonna do while we were together. The things that I told him I wanted to do but that for one reason or another I was unable to do.

I generally choose the latter. Although not always, sometimes I wallow in the inadequacy for a while and sometimes I push it aside and ignore the feeling. But I am determined to do more of the getting and less of the last 2 from here on out. To pursue the things that interest me and to just give things a try.

My last cake decorating attempt was an unmitigated disaster: 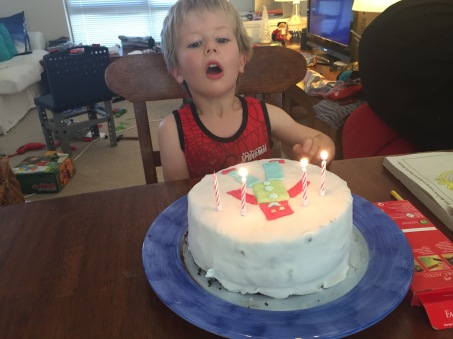 Tell me that cake isn’t ugly!!

But I did it! I decorated that very ugly cake all on my own. The next one will be better and hopefully the one after that will be even better. I doubt I will ever get to professional status but it’s one of those things that I am teaching myself, that I wanted to learn. Likewise the running a half marathon is one of those things that I wanted to do. That I am determined to complete.

I am only as inadequate as I decide to be. I only have gaps if I choose not to fill them.