This last week has been a bit of a wash. In fact it was a total wash. I achieved next to nothing in the way of study leaving me almost a full week behind!! Not good this early in the semester but I am sure that I will catch up.

I am still experimenting with my new note-taking technique and if FEELS like it’s working. I feel like I am taking in more of what i am reading and looking through and hearing, I will give it another few weeks and let you know for sure.

My planner is really starting to come into it’s own. I am so pleased that I got it. I already feel more put together and like I have everything a bit more sorted. I am already making entries for things like classes that I do with The Russian and the expiration of Moody’s script for medication well into September etc. It is incredibly messy already but given my handwriting that was ALWAYS going to happen (this is one of the reasons why I am so glad that I can type here as opposed to write. If it was written out no-one would be ABLE to read it!).

Fitness wise I got out for a run twice last week. I was planning on a 3rd outing but Moody was home unexpectedly at the end of the week and so it didn’t quite go to plan. But it gives me a base to work from. I got to weigh myself at The Russian’s place and am down to about 76kg (roughly it is an old dial scale so no fancy digital display). Not great but I will take it. Mind you I am back into my size 12 jeans and that is absolutely a step in the right direction. They are even a bit loose in the legs although still snug around the waist.

I have spent some time planning out a new route on mapmyrun which is just under 6km, as it would seem that without an out and back element a 5km course around here is hard to come by (and out and back courses are WAY too much of a challenge for my self discipline…). Thankfully the new route still starts and ends at home but it loops around in the opposite direction to my current route so new scenery. The main reason for the change though is that I am pretty sure that I am faster than the 5km record that I have on my garmin but my current route is 4.6km so I haven’t had the opportunity to see if that’s true.

The kids are doing so well. Moody spent most of this weekend with his Dad and I didn’t get a phone call asking me to pick him up early. So I will take that as a win, it gets a bit wearing being used as a punishment (as in “if you don’t behave I will send you home!” and “you have to show me that you want to spend time with me by behaving well!” and yes those things have been said, and yes Moody’s father sees that as good parenting!). He brought home his grade 3 swimming certificate this week as well. We have been watching his confidence in the water improve steadily over the last few weeks so it was no real surprise that he passed but I am pleased nonetheless. Although he has been getting a bit rough of late with his siblings so I am trying to monitor it all without being too strict. Horseplay is fine but he is almost twice Mayhem’s size which can mean that things that would be OK if Mayhem were bigger are just NOT OK.

Mayhem had his 4 year old health check and vaccinations as well. I was nervous all week after booking it in and decided that telling him would be better than springing it all on him at the last second but despite him talking EVERYONE’s ear off about it (mine, Nanna’s, his teachers at both kindy and daycare!) when the time came he handled it like a little champ. Barely a whine and over it almost as soon as the needle came out. He was amazing! After going through the same process with Mischief last year and the drama and theatrics with her I was worried it was going to be a bad day but it turned out to be pretty good (then again I wasn’t the one on the receiving end of the needle!). He had a bit of a nap and was a bit fatigued the next day but aside from that he was good as gold. 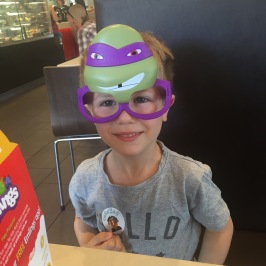 I meant to post on FB about Mischief’s new tap shoes. I got them for a song on eBay, they are second hand but in very good nic so I was thrilled with the bargain and she is thrilled to have “proper” tap shoes.

She has been “tapping” around the house for days and sneaks them on whenever she can. I even caught her attempting to go to bed with them on!! She still has all of her teeth, no visit from the tooth fairy yet, but I can see the new adult teeth peeking through her gums behind the old ones so they are definitely going sooner or later.

I had a chance for some down-time with a class with The Russian on Sunday afternoon followed by a meet-up with some of his friends. It was so much fun. The class was great with a few new people in attendance. I got chatting to a few of them specifically a couple who were adorable they definitely get my vote for relationship goals. He was HUGE as in bodybuilder HUGE, over 6 foot would be my guess. He mentioned that his main goal is to be able to overhead press her (which he can do currently but he reckons every time he does it she puts on another kilo!) and she was no slouch in the shape department herself. They were really sweet together. I also got to know some of the others a bit better that I have seen there on and off through the previous weeks.

The meet up afterwards was great (the cute couple from the lesson showed up which eased my anxiety over so many new people considerably, that and a glass of wine on a very empty stomach helped!), I found one of the girls had on some kitty ears that moved around as she spoke and reacted to her expressions. I thought they were interesting and if I can swing it would make a great gift for Uni Sister (my oldest step-sister).

Meanwhile the Mess Makers were with Nanna for the afternoon/evening. They all had fun and were thoroughly worn out by the time I got there (as evidenced by the 10am sleep-in that we all had – this is unheard of in this household with Mischief and Mayhem usually coming in to wake me between 6 and 6:30am most mornings – it is a really good thing they are cute because I am SO not a morning person!)

There was a bit of an awkward moment when Ex-MIL called to speak to the kids obviously assuming I would be at home with them, I had to tell her I was out… without them… I am hoping that hasn’t been passed on to The Tinman but then again I am writing about it here and it’s not like he doesn’t know about the blog so meh (picture me shrugging my shoulders). We however didn’t stay at the meet up for too long. We ended up heading out to Hungry Jacks for dinner as the restaurant/bar that it was being hosted in was WAY pricy ($40 for a small steak is a bit much) and very pretentious. It was theatre having my glass of wine poured for me, which don’t get me wrong can be nice but the vibe coming from the waiter was not great. I had a good time talking to the others there though and it was so nice to get out without the Mess Makers and feel like a genuine adult. The Russian was very impressed with my dress and gave me a few compliments which was nice too. Although I am glad to be home today, we have spent the day hunkered down and not doing too much thankfully. 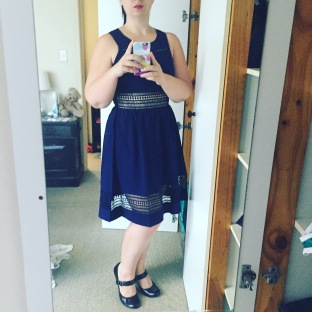 For the coming week I need to catch up with most of my uni stuff which is going to be a challenge because Mayhem is due home on Friday this week and Monday was a public holiday meaning I have 3 days to effectively do 6 days work…. probably not going to happen but I can try right? Then I also have to pick up my diploma work because I haven’t touched it in weeks… discipline is a word sorely lacking from my vocabulary right now… can you tell?