So we are now finishing up week 3 of the semester, only 9 to go (not including the study week in the middle!)… what a scary thought!

This week has been really great. Busy but good which is always a plus.
The biggest news this week was Mayhem getting his very first school certificate! I am so proud of him! He stayed true to being a little MessMaker though and as he was walking up to collect his certificate he wiped his nose on his right hand and then directly afterwards shook the Principle’s hand…. I just shook my head. I don’t think he realised at first that I was watching because he wasn’t too thrilled but then he spotted me waving in the crowd and started smiling a heap. I couldn’t wipe the smile off my face. To add to the happy vibes his whole class won the golden broom award for keeping their classroom tidy. They were so thrilled to recieve it. 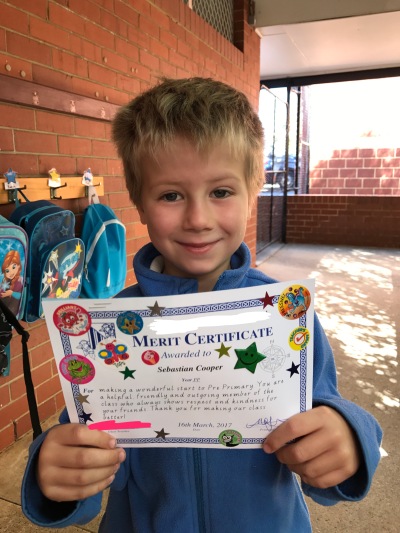 Mischief has officially lost both of her front teeth, she is very cute without them although the new ones are coming in fast (thank goodness, because as cute as she is kids need teeth, watching her eat an apple for the last week or so has been interesting!). She was really thrilled that she managed to lose both teeth in less than a week! 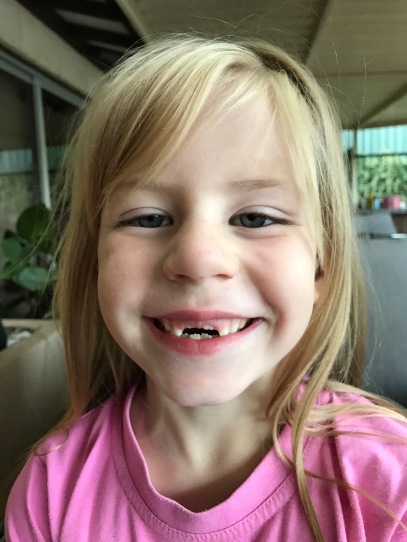 Moody gave me a scare this week. Or rather one of his friends did. He and his friend hang out together a majority of the time and his friend has been over a couple of times now which is all good. Last Thursday he came on over which was fine. He told me he had checked in with his Mum and she was all good with it. I thought that was fine and so we all jumped in the car to go home. The boys hung out for an hour and a bit and then Friend comes out to say he just needs to call his mum, I asked why and he explained that he had checked if he could come, but with his little brother instead of his mum and it just occurred to him that his mum might not actually know where he was…. GAH! So we called her a couple of times, I dropped her a text explaining the situation and hopped straight back in the car to drive him back. Thankfully she already knew where he was (his brother had remembered to let her know after all) and all was well with the world. But note to self, text to check with the Mum myself if I don’t see her personally!!
Uni is going well. For the most part I feel on top of things. I have changed planners at the beginning of the semester to a smaller size than the A5 I was using before. I also switched from a ring bound planner to a Travellers Notebook style. I am still waiting on the actual notebook to arrive but in the meantime have made myself up a couple of inserts, one is a diary insert by DIY Fish on Etsy which is awesome (I love her products, absolutely worth the cost, every single cent), but I am seriously considering changing to a day to a page style again (smaller page means fitting everything onto it is a little tough, but I still adore the inserts that I am currently using). 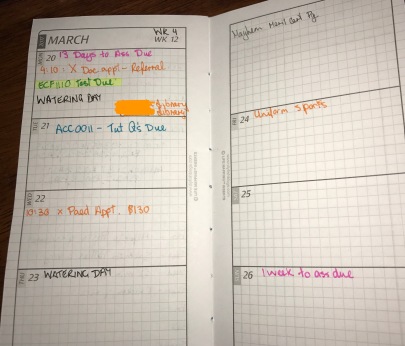 The other booklet I made is just a blank book made up of an old KikiK notepad I had lying around. Because only one side of that paper is patterned it has half of each opening patterned and half not, but I still love it! Kind of makes it look a bit funkier to me. I plan on using the blank book for different notes and schedules that I don’t want in the calendar insert. So for example in it I have written down a complete list of all of my assessments for the current semester. That way I can have a running list of what needs to be done. 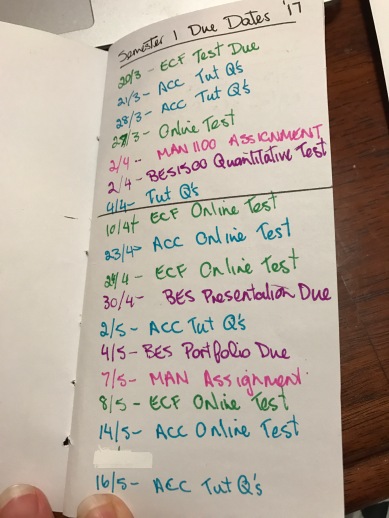 As for the actual study it’s self I feel like economics and accounting are both attempting to turn my brain inside out but I am loving the challenge. I am finally feeling like I have settled into a groove with the filing and stuff (I will actually do a full post on that later) which has helped allot. My biggest stressor is an online economics test which is due tomorow (hence why I am writing a blog post tonight!! HA!) but aside from that things are feeling pretty cruisy.