This week is orientation week at uni. The week when traditionally the unit plans and schedules are rolled out to the trembling mass of students who are either chomping at the bit to get started or curled in a ball rocking under the chair… I am somewhere in between.

END_OF_DOCUMENT_TOKEN_TO_BE_REPLACED

This week signalled the start of a brand new school year. Moody is now officially a high-school kid with his transition to year seven, and Mischief and Mayhem are now both in their junior years of primary school and I have changed from purely online study at university to also doing on campus study with TAFE.

END_OF_DOCUMENT_TOKEN_TO_BE_REPLACED

Yeah I am not going to believe that I titled this that way in 3 months either. Or more likely I am going to look back and laugh!

END_OF_DOCUMENT_TOKEN_TO_BE_REPLACED

These holidays have been very quiet. We have spent most of the time at home to be honest. Mainly due to finances, which sucks. Although the Mess Makers did have the chance to go out to the zoo with the OutLaws which was a wonderful day for them and allowed me to get some of my study done.

The OutLaws were lovely to take them and said that they had fun as well which is wonderful, although Moody did pull a stunt at the end of the day which meant that he got a talking to not just from them but from me as well. The joys of raising children. He decided to help himself to the snacks that were left-over from the trip which wouldn’t be such a big deal but he went into the bag to get them, lied about it and then attempted to hide the evidence. Mother OutLaw was not impressed and neither was I. So we all sat him down and had a chat about it.

Meanwhile I am approximately 3 weeks behind on my study load which has me stressed to the max. Over the last 2 weeks my productivity has waned due to being exhausted. I have pretty much been up studying until 11 or 12 at night due to getting nothing done during the day as the kids have the TV going in the lounge most of the day (even when they aren’t watching but the second you turn it off they “were watching that” – apparently even through walls….) and want my attention a whole lot of the time. I love them but there have been times when I have just wanted to scream because I need to concentrate and they just want to be on top of me!! There has been no flow happening at all! 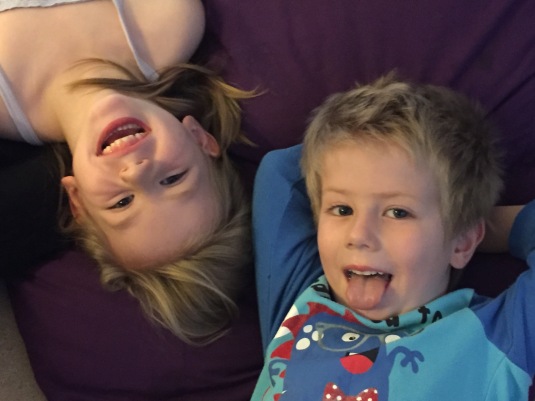 Mind you they are very sweet kids and it has been nice to get all of the extra cuddles. I am a bit sad that tomorrow will be the first day of term 2. But I am thrilled that I will be able to sit at my desk and concentrate for most of the day tomorrow! Not to mention being able to go for a run! We have the Mothers Day Classic coming up weekend after next, it is 4km and I booked in months ago thinking it would be fine, then I stopped running about a month ago!! NOT GOOD!!

The next few weeks though are going to be busy. I have a case study for existential/humanistic therapy and I am not really exactly sure about ANY of what we have learned. Then I have a research report due and OMG!! Last I have another case study due for Children and adolescent therapy… then we are in the last week of semester and then it is study week and then EXAM TIME!!! Holy hell! But it could be worse. I could have 5 or 6 assignments due. 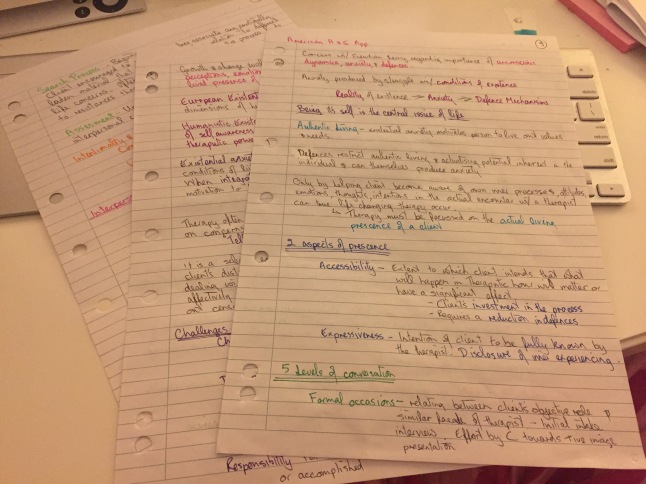 All of that said though my planner has been evolving and changing as the semester has gone on. There are bits that I haven’t even touched, bits that I have used religiously, things that I have thrown away (washi tape and I are not friends… perhaps it was just that it was cheap and nasty tape?). But I promise to share a bit more about it once I have it a bit better sorted and a bit better set up. 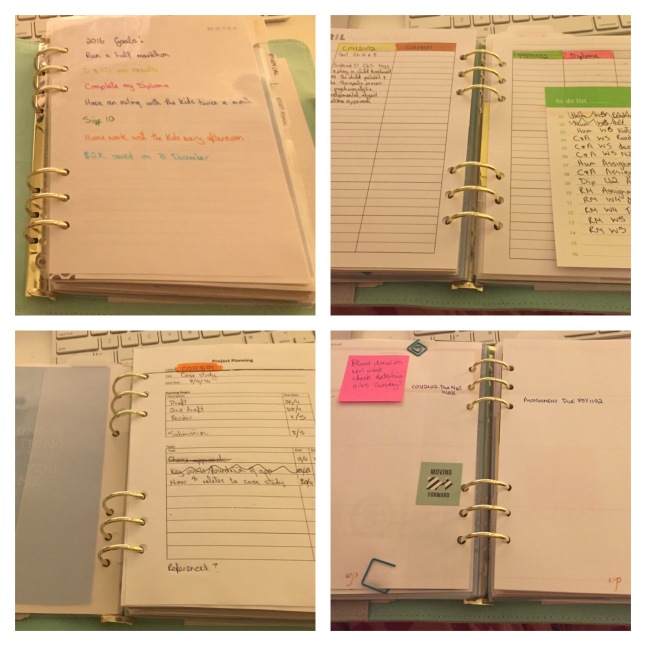 It has already saved my financial bacon once by reminding me ahead of time that my car registration was due today. Which means that I managed to pay it last week and then note down when it will next be due.  Mind you managing the finances would be a bit easier with a little more money. To be honest this whole single parenting thing sucks in that respect. I can tell you right now I don’t know a single mother who is “living on easy street”. It’s a tough gig financially!

Any tips on saving some cash?
Planner pages you use to keep life in order?

So the Mess Makers have all been at school for the last few weeks which has been alternately AWESOME! But also a little bit sad, I miss having the babies around for those extra days and the house is so quiet when they aren’t all here! I never thought I would be sad that they are all at school but for the minute it’s true. Mind you I am expecting that to change a bit once I get started back at uni…. which happens on MONDAY!! Cue the scream of terror:

I have just gone through and printed out the course outlines and entered all of the dates into my planner and written out allot of the readings into my uni-pages. 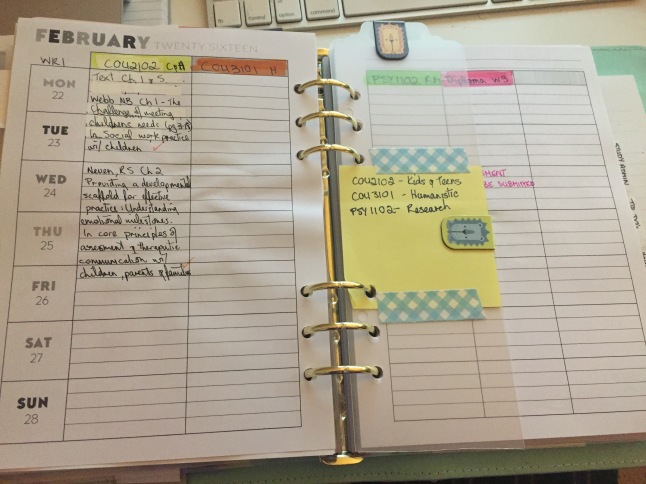 My planner isn’t pretty but I am really hoping it’s going to be functional. :).

I have got a small issue that the readings for COU3101 aren’t actually listed in the course plan they are simply listed under each module… so helpful. So I have all of the modules printed out and am simply going to print them a week ahead so that I have them on hand for when I need them. Right now my reading pile for week 1 looks like this: 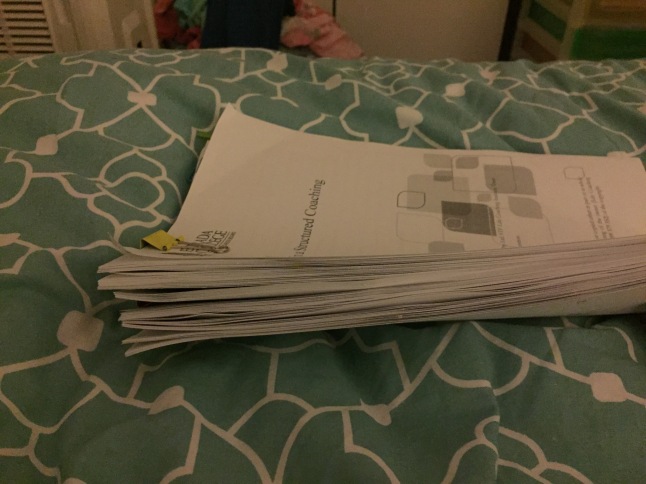 Yup… I am FREAKING OUT!! But in a good way. So let the madness begin.

But in the meantime this weekend is going to be fun. Mischief and Mayhem have dance class first thing on Saturday (yay!) which they are both enjoying. Then almost straight away (we get an hour in-between to get back to the car and get ourselves sorted) we have hockey tryouts for Moody and Mischief. I figure they can do it for a season, if they love it great, if not then they can give it away but it gives them a grounding in another sport at least. Mayhem was all sorts of devastated when he found out he couldn’t participate but they only do 5 and up and he is not yet 5 unfortunately. Cue the big blue eyes welling with tears and the very pouty bottom lip. He is beyond adorable when he sulks.

After all of that fun Mischief and Mayhem are going to Nanna’s for the night and Moody is going to his Dad’s, which means MAMA GETS A NIGHT OFF!! I have a very clear idea of what I am going to do, it involves sitting on a dark beach all alone. I am so looking forward to it. Then Sunday morning I have all to myself as well so the current plan is to get up early and go for my long run which will be 4 miles which is about 6.5km. I am working from an American training plan but given that the race I want to run is tracked in miles it seems appropriate. 🙂

So life is a moving with that normal crazy making everything is going so fast and yet SO. VERY. SLOW pace which is maddening and really really fun. I can’t wait to see what this semester brings.

Good luck to all of the students out there.